Palm Sunday is the celebration of the entrance of Jesus Christ into Jerusalem after he had raised Lazarus from the dead. Read on to find out more about the Palm Sunday service and other traditions.

The Sunday before Pascha (Easter Sunday) and at the beginning of Holy week, the Orthodox church celebrates the entrance of Jesus into Jerusalem. Having heard of His miracle of raising Lazarus from the dead, Jesus was triumphantly welcomed into the city by adoring crowds waving palm branches.

Five days before the Passover, Jesus travelled from Bethany to Jerusalem. As they neared Jerusalem, Jesus sent two of His disciples to the nearby village of Bethphage to fetch a donkey and her colt that were tied there. The disciples fulfilled His requests, thus fulfilling the prophecy found in Zechariah 9:9 which states, “Rejoice greatly, O daughter of Zion! Behold, your King is coming to you; Lowly and riding on a donkey, and a colt, the foal of a donkey.” So, Jesus entered the city not in a royal chariot drawn by horses, but humbly on a young colt covered with the well-worn robes of His disciples.

Having heard of His great works and teachings as well as His miracle of Lazarus’ resurrection, people gathered in Jerusalem to welcome Him. Christ entered the city accompanied by throngs of people who followed Him from Bethany or had met Him on the way. Enthusiastic crowds went out to meet him waving palm branches, laying their clothes on the ground before Him and shouting, “Hosanna! Blessed is he that comes in the Name of the Lord, the King of Israel!”

At the beginning of His public life, Jesus proclaimed the kingdom of God. He called for an inward change of mind and heart, which would result in concrete changes in one’s life and to follow Him and accept His messianic destiny. Christ’s triumphant entry into Jerusalem was a messianic event, through which His divine authority was declared. Palm Sunday summons the faithful to lift their voices and praise God, “behold our King, the Word of God made flesh.” 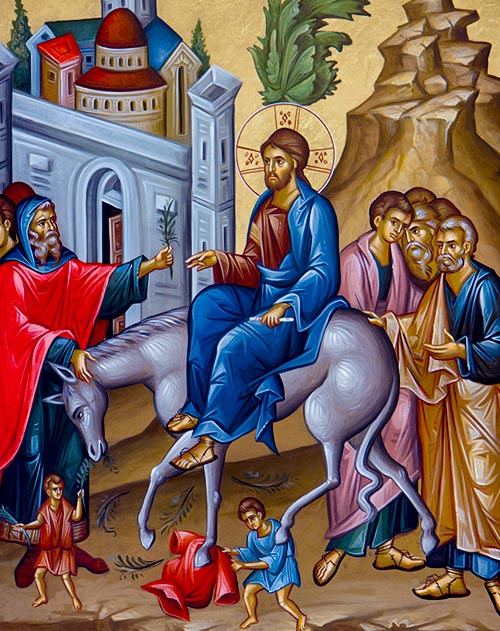 Icon of the Feast of Palm Sunday. Source: goarch.org

The church celebrates this highlight in Christ’s public life with the Divine Liturgy of Saint John Chrysostom. Additionally, a procession through the church reenacts Christ’s entry into Jerusalem, with the blessing and distribution of Palm Crosses and bay leaves at the end of the service. Palm Crosses are taken home placed behind icons until the following year. Many believe that the bay leaves blessed on Palm Sunday and later be burnt can restore health to those who have fallen sick.

Learn how to fold your own Palm Crosses at home here. Although Palm Sunday falls within Sarakosti (40 days of Lent), fasting is modified because of the triumphant nature of the Feast. The church allows the faithful to consume fish, oil and wine. Bakaliaros (cod), skorthalia (garlic dip) and fried vegetables are traditional, however any fish dish may be served.

Find the recipe for skorthalia here.

Services of the Bridegroom
Scroll to top