Beginning on the evening of Palm Sunday until the evening of Holy Tuesday, the church observes the Services of Christ the Bridegroom, which recount and commemorate Jesus’ last earthly days.

It is important to note that the church day always begins the evening before the secular day so, most of the services during Holy Week are rotated twelve hours ahead. With this being said, the services for Holy Monday, Tuesday and Wednesday are sung in the evening of Palm Sunday, Holy Monday and Holy Tuesday respectively.

The Services of the Bridegroom constitute a single liturgical unit, which all have the common theme of Christ’s last teachings to his disciples and foreshadow his death and resurrection. They are based on a series of parables and incidents that happened in Jerusalem which anticipated the Passion of Christ.

Holy Monday (sung on the evening of Palm Sunday)

The name of the services comes from the Parable of the Ten Virgins, in which Christ the Bridegroom is the central figure. The service on Sunday evening, celebrates Christ as the Bridegroom and the church and its people as His bride. In the same way that a bride must be ready to meet her bridegroom, the people must prepare (through Holy Week) for eternal union with Christ. During this service, the priest carries an icon of Christ the Bridegroom into the church. The Bridegroom troparion (“Behold the Bridegroom comes in the middle of the night…”) is sung during this procession, and the icon is brought to the front of the church and remains there until Holy Thursday. The icon depicts Christ as He was dressed by the Roman guards prior to His crucifixion, “bearing the marks of His suffering, yet preparing a marriage Feast for us in God’s.” The crown is a symbol of His marriage to the church; the rope represents bondage to sin, death and corruption, which was loosened with His crucifixion; and the reed is a symbol of His humility. 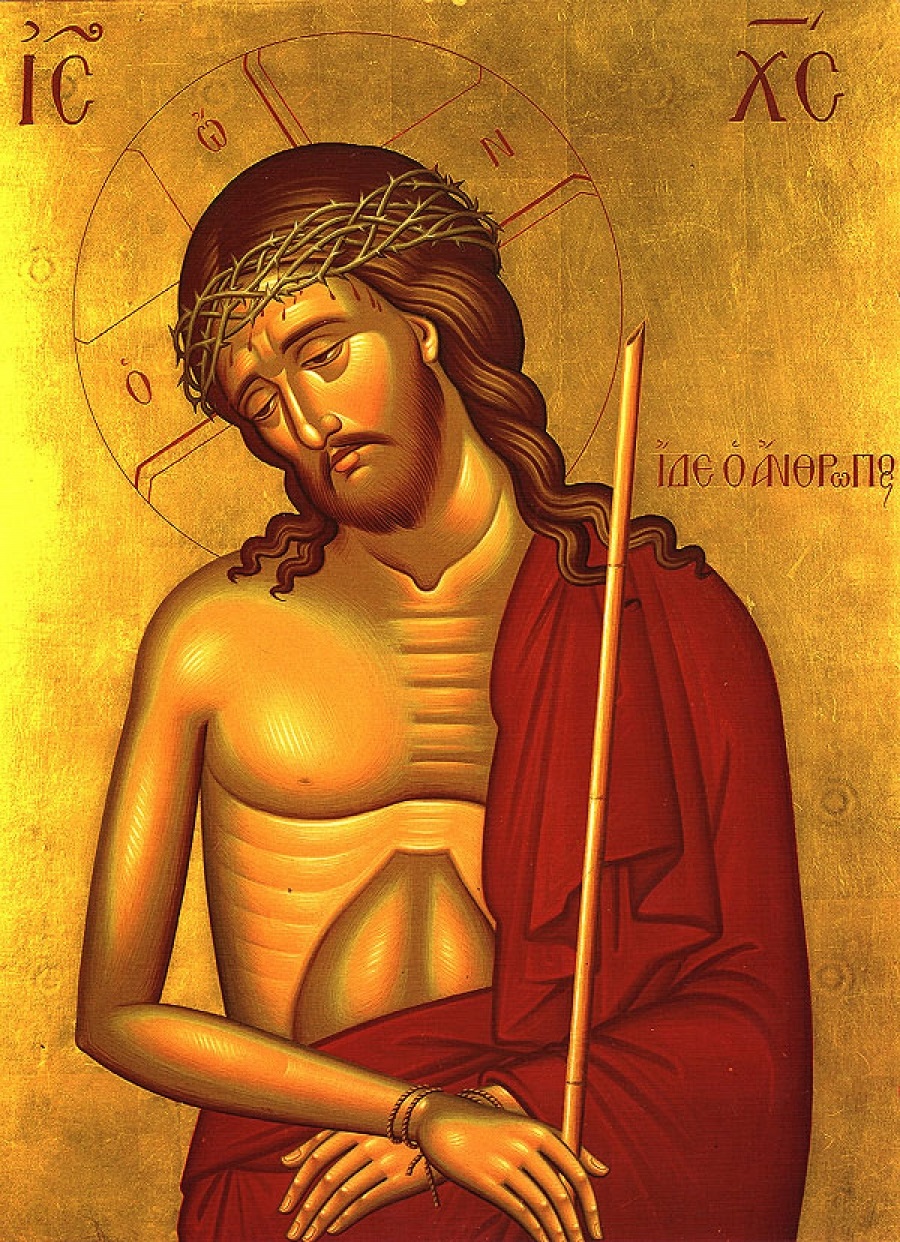 On Holy Monday we commemorate Joseph, the son of Jacob. A prominent figure in the Old Testament, Joseph is often seen as a tipos Christou (a prototype of Christ) because of his exceptional qualities and remarkable life. Joseph was betrayed by his brothers, thrown into a pit and sold into slavery by them. Similarly, Jesus was betrayed by His own and sold into the slavery of death. Joseph forgave and spared his brothers during the famine when they came to him, just as Christ offers himself as a sacrifice and forgives all those who come to him in faith.

The Gospel reading for Holy Monday is that of the Barren Fig Tree, which Jesus curses for not bearing fruit. The fig tree represents those who have heard God’s word, but who fail to bear the fruits of faith and obedience and put His word into action. This parable is a reminder that on the Last Day, Christ’s judgment of the faithless, unbelieving, unrepentant and unloving will be certain and decisive.

Holy Tuesday (sung on the evening of Holy Monday)

The Parable of the Ten Virgins

The theme of Christ as the bridegroom is repeated again on Holy Tuesday in the parable of the Ten Virgins. It tells the story of virgins who are preparing to meet Christ by filling their lamps with the oil of charity and love, but only five of them are ready and the rest allow their lamps to go out and were shut out of the marriage feast. The lesson of this parable is that the faithful must always be prepared to receive the Lord when he comes again or risk being shut out of the marriage feast (the kingdom) on Judgement Day.

The Parable of the Ten Virgins. Source: A Reader’s Guide to Orthodox Icons

Holy Wednesday (sung on the evening of Holy Tuesday)

The theme of Holy Wednesday is repentance and forgiveness. This service commemorates the sinful woman who anointed Christ with myrrh. While visiting the home of a Pharisee, Christ was approached by a woman weeping at His feet. Despite the Pharisees dismissal of her unworthiness to touch christ, Jesus forgave her for her sins. She is presented as an example of how to repent for one’s sins and be saved. The Hymn of Kassiane is sung during this service to honour this woman and remind the faithful to repent and be forgiven before it is too late. Written by Kassia the Melodos, one of only four Orthodox women hymn writers, the Hymn of Kassiane is one of the most beloved and beautiful hymns in the Byzantine repertoire.

Listen to the Hymn of Kassiane here.

Holy Wednesday: Sacrament of the Holy Unction
Scroll to top