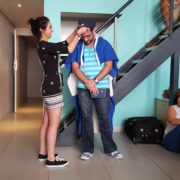 We interviewed our ex NAHYSOSA President, Andrea Spyron (2015 & 2016) to find out more about her exciting adventure and what she has been up to since handing over to current President, Andreas Coulbanis.

1. It has been approximately 5 months since you did the official handover. How did you feel in that moment and how do you feel now?

Wow! It was a bit hectic then I won’t lie to you. I was a bit worried I would have left something out or that there would be a misalignment of perceptions. It’s quite tricky to talk through everything you know and what you may think the other person may know. It was also crazy trying to pull all the admin after Congress in time. So it was a bit stressful, and I was sad to be saying goodbye to about 6 years of my life, but once I handed over I was quite relieved – just emotional haha.

2. Since handing over, you have probably had a lot more free time on your hands, what have you done with this free time?

Well I didn’t leave much time to waft to be honest. December/January was a very busy “holiday” or “life catch-up” period for me. We also tried to do the handover when both of us had time. I was also busy making plans for the year which actually saw me jump onto an airplane at the end of February for a few months with no definite direction. However, I am a bit of a control freak, so I did need to know that I’d be adding value during this time in some way. I previously came across information about Greek language courses through the Aristotle University of Thessaloniki and I like the idea of having a “routine” but being able to use Thessaloniki as a base should I want to venture into Europe. It also worked out nicely because I have family here.

3. What made you decide to leave South Africa and travel?

I’m not going to lie to you there were quite a few factors. But I can tell you that I wasn’t too fulfilled or challenged in my job (which I wasn’t sure about in general) for a while. I then also realised I’m not paying anything off or attached to anyone, I’m free from committee responsibilities and obligations, and I generally enjoy travelling. So if there was ever a time to “take a gap year” – it would be now.

4. What made you choose the Greek course?

As I mentioned above I couldn’t deal with not knowing a basic plan. I guess now is also a good time to mention that my Greek isn’t very good, at all, which is a regret of mine. So sticking with the NAHYSOSA ethos of UNITY, KNOWLEDGE, CULTURE I decided to continue the experience in my own way and improve on something so valuable to being a Hellene…while I try find myself haha!

5. What made you choose Thessaloniki?

A bit of what I mentioned before but I have also never been to Greece. I suppose I could have gone to Cyprus or tried to do something online, but this travel thing was also about getting out of my comfort zone, learning about myself and how I manage when experiencing new things. And Greece is beautiful so why not 🙂

6. Have you stayed in Thessaloniki the whole time or have you travelled? If so, where and what was your experience of these places and travelling?

I have been a bit restless. Before I came to Thessaloniki I stopped off in Cyprus for a brief family visit. After two months here I managed to go to London because I absolutely love the city and I have family and friends there. It’s such a great city! Easy to get around, and so interesting. I don’t think you could ever get bored there. Every time I go back I have such a blast. I also manged to briefly visit Zurich. I’ve always wanted to travel to Switzerland. And so before it got too expensive over the summer I thought it would be a good time to get my first taste of it. I can save you all a lot of money and tell you that Lindt is indeed the best chocolate to come out of Switzerland. Sorry to break it to you…

7. What has your experience of being away from home and family and friends been like?

Since Congress 2014 I have been using the phrase: “It’s not where you go. It’s who you’re with!” and this cannot be more present in my life right now. I am grateful to have taken this opportunity and I’m not ready to come back home juuuuussssttt yet. I also did want a bit of alone time to pull myself towards myself (also a trademark of mine). But there have been many times when I’ve been through something or seen something or tasted something or whatever it may have been that made me think of someone back home. Or how I had a good time experiencing something and would have loved to have shared it with those close to me. This isn’t my first time away from home home (yes x2) but it is my first time out of South Africa for so long, away from everyone I know for so long. And it’s truly made me appreciate what I am blessed with each and every day as well as what we have in South Africa. I don’t think I’ve ever spoken about our “Rainbow Nation” more than I have since I left and I’m so proud to be able to show anyone and everyone who will listen what we as South African Hellenes are up to. And let me tell you, it blows their minds.

8. Where do you see yourself after this experience?

Even me I’d like to know! No but I guess just more settled in life. Hopefully more mature to make the most of what I have in front of me and to stop wishing about the future and staring so long at it that I do not live in the present…I’m sure this answer will change as each week passes though.

I do miss NAHYSOSA. I am fortunate enough to have mostly had a good experience. It gave me so much I cannot even begin to explain. But I guess if it wasn’t worth it, we wouldn’t work as hard as we do for it. However after six years you get a bit tired. In your thinking and your effort. I also feel NAHYSOSA cannot grow if the new, fresh and bright ideas and limited due to “traditional” thinking (I’m also a control freak rememeber 😉 ). So I don’t think I will get involved again. I will however always be there to support NAHYSOSA and the affiliates as best I can. But I’ve also learnt to never say never…so you never know 🙂

10. Any advice for someone deciding to leave South Africa and travel abroad for a long period of time?

It depends on why you’re going to be honest. If it’s just because you want to party my advice will be a little different to if it’s for career or personal purposes for example. But I guess the general is as follows: 1) Budget. Budget for the known and for the unknown. This will also determine your path, whether you’re free-wheeling or have a plan. You’ll know how hard you need to work before or if you’ll also need to work while you’re abroad… or how soon you need to start working after you’re arrival 2) Packing isn’t easy. Especially if you’re crossing seasons. A lot of winter jackets are becoming warmer and lighter. So invest in the right gear. But also understand you can’t take everything with you. So prepeare to mix and match and wear things again. Also consider that you can buy things as you go if you really need. Toiletries are also an issue. They take up a lot of room and weight. So consider taking what you need for maybe the first month and then be prepared to buy as you go (see … budgeting!) 3) It takes quite long to get ready for a trip! Don’t think you can pack on Monday if you’re leaving on Friday for five months abroad. If you need Visa’s and documents make sure you start well in advance trying to acquire them because, let’s be honest, admin very rarely runs smoothly. 4) Embrace it! Whatever you go through – make the most of it! Live for then. Don’t think you can come back later to enjoy a place. Enjoy it now because you are there NOW. 5) If you’re going alone – a great and cheap way to meet people is through pub-crawls. They’re usually there for the same reasons so it’s a good start if you’ll be spending some time in a city you’re not too familiar with.